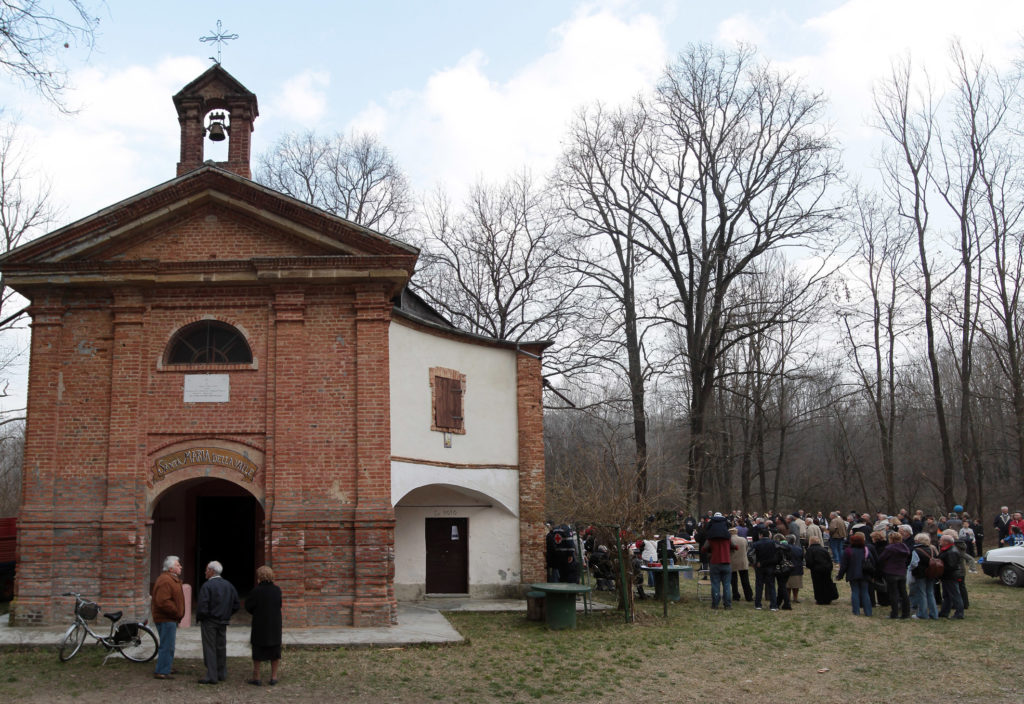 The Celebration of Saint Joseph is a centuries old tradition that needs to be preserved. It takes place at the little Church of Saint Mary in the Valley, in Santonco near Montafia. It is a magical place of great natural importance.

People gathering in this place on 19 March every year to pray and to share food represent  a very ancient tradition. The legends intertwined with real facts are many, intriguing  the visitors.

In fact the story goes that this site, that in the past was a marshland, should not be the original location of the little church. At that time, as it usually happened, it was decided to build it on the top of a nearby hill. However, during the construction, the builders used to find the bricks they had put on top back at the feet of the hill every day. They thought it was the Will of God, in particular the Virgin Mary, to desire that particular location. Therefore they decided to build the church right there.

The church later became very important to the people of Piovà and surroundings. They used to go there for vows and prayers to the Virgin hoping for miracles, and  Saint Joseph started to be celebrated there, as well as the beginning of spring. Pilgrimages where constant until 1950’s, in particular mothers were taking their babies there, hoping to have them healed from cradle caps.

But if the church is dedicated to the Virgin Mary and Saint Joseph is celebrated there, who is San Tonco? A Piedmont  saying goes: “Santè, santunc e sanginìs, sun tre sant che sun nen in paradis”, which means “ santè (the trail), santunc (Santonco) and sanginis (a typical insect of the area) are three saints that are not in heaven”,  because even if their name start with “san”, none of them is a saint acknowledged by the Church.

Don Claudio Berardi, the parish of Piovà, says that the name of Santonco is probably after an hermit living in this little church. In fact, in the parish documents a letter from Don Giovanni Bosco has been found, where he was asking to transfer there a parish named Pietro. Since he could  not preach due to his stuttering, the place would have been a retire place for him to pray. Many people started visiting him in that valley, and since it was a difficult place to reach, they probably would ask where to find the “santun” , the saint in dialect. Hence the name “santunc” for the area.

This little church has been referred to as esoteric place, and it went through many difficult events. Even if it is not deconsecrate, today it is property of the village municipal hall and its citizens.