Piovà is the birthplace of Cardinal Guglielmo Massaia and of the violinist and composer Giovanni Battista Polledro.  The historic center of Piovà is its most distinctive feature with many fine buildings.  Piovà is composed of two villages located on adjacent hills on the left side of the Triversa River: Cornegliano, with its castle and parish church, and Bricco, where originally there was a Ricetto, which is a small-fortified area used for the protection of the residents of Italian villages in case of attack.  The village hall is located on the main road which connects the two villages.  Piovà is known as the “Peppermint Village” because of its ancient tradition of cultivating this official herb.

The church is one of the most wonderful examples of Piedmont Baroque and is dedicated to the Saints Peter and George.  The latter is the patron of the village.  Construction started in 1749 and was completed in 1774.  The design is attributed to Benedetto Alfieri, who was the architect of the Savoy Court.  It is very unusual for such a small village, and it was commissioned by the Marquis Ricci.  Originally, it was supposed to be part of a building complex combined with their palace.

There are no confirmed reports concerning the origin of the palace, which has the somber but multifaceted characteristics of eighteenth century architecture.  During the restoration of the building, a nineteenth century decoration was found in the middle of the ceiling.  It represents an Eagle in the form of a tone-on-tone cartouche.  The Eagle theme may be connected to the village of Piovà since it was part of the Radicati of Cocconato County until 1731.  Its heraldic symbol is the Golden Eagle on a black background.  Therefore, this palace may also have belonged to the Marquis of Ricci.

The Romanesque Church of Saint Martin of Castelvero

In the square named after Saint Martin, which was once part of the territory of Castelvero and today is in the hamlet of Piova, is a geological formation known as a “tuff spur.”  On this tuff spur lie the remains of the Romanesque church of Saint Martin.  It is one of the oldest churches of this type ever discovered and is connected to the first of the Christian cults.  One of the architectural features is a double apse, making it unique.

The Little Church of Santonco

The little Church of Saint Mary of the Valley is located near Santonco in a rounded glade surrounded by woods.  The area is rich in fossils and stratified rockslides.  This place is particularly beautiful, which has helped to spawn many legends and, therefore, make it a destination for pilgrimages and a meeting place for the locals.

There are 11 churches in the village of Piovà.  Among those worth a visit or at least a glimpse from the outside are the little convent of the Humiliation of Saint Elizabeth, with its unique, odd, triangular bell-tower, the monastery of the Holy Trinity, Saint Charles’ Parish Hall, and the chapel of the little Madonna.  The latter building, which is northwest of Bricco, marks the beginning of the old, hilly and scenic “road of the salt” that leads to Cocconato. There are many religious shrines as well.  In Italian they are called Piloni Votivi.  They can be seen in rural areas and are often dedicated to Saint Grato, known as the protector of crops and farmers.

The old public well has been restored recently and is located in the valley between the center of the village and the town of Saint Peter.  The valley is known as the “valley of the well’ due to its location there.  It has considerable hydraulic volume and was once used as a public washhouse.  The inhabitants of Piovà have always drawn water for agriculture and for their livestock from it.  Today it is a rest stop and refreshment area for the many tourists walking, biking, or riding through these wonderful hills. 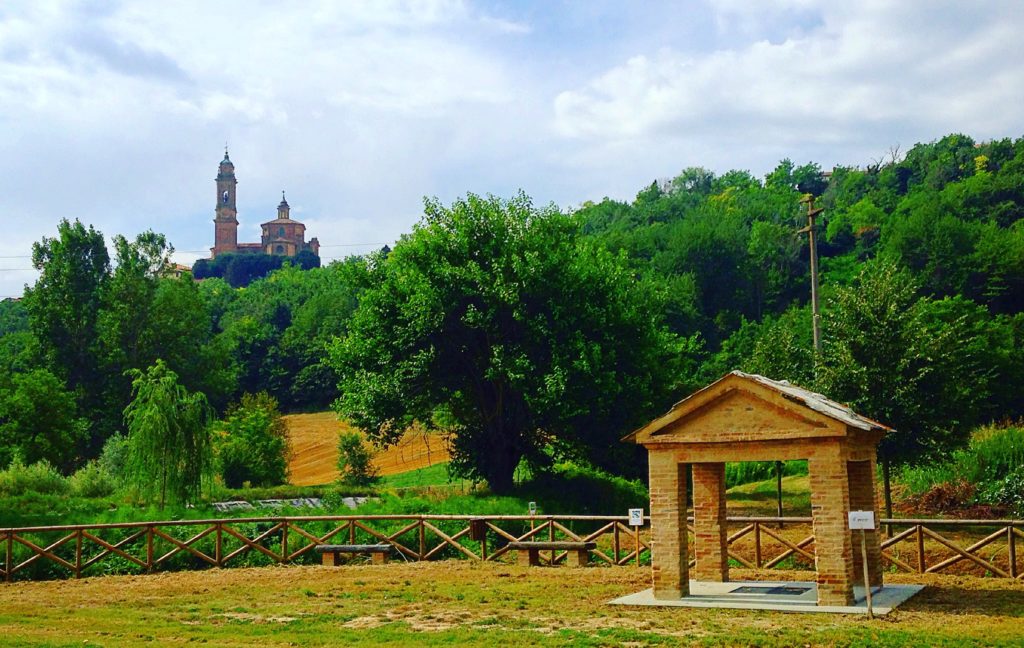