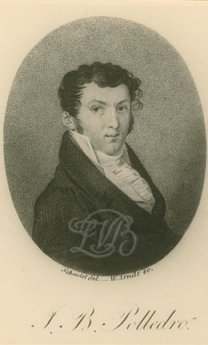 He was born in Piovà on 10 June 1781. He was the last representative of the Piedmont fiddle school of the Nineteen-Century. He studied in Asti with M.Calderara and G.Vai and at the age of 15 he became  student of Gaetano Pugnani. He soon entered the Royal Band of Turin. In the year 1797 he had his first public performance.  In 1801 he moved to Milan where he started to play in concerts. In 1804 he became the main violinist of the Bergamo Theatre, but after a short period he started to travel.

He lived five years in Moscow, Russia , where he was at the service of Prince Taticev. He had concerts in Warsaw, Berlin, Saint Peterborough, in France, The Nederland and London. In 1812 in Karlsbad he played an early sonata of Ludwig van Beethoven, who accompanied him on the piano. He accepted the nomination of Konzertmeister (main violinist) at the Chapel of the Court of Dresda  from 1814 through 1823. He served Frederic August III, who then became King of Saxonia by the name of Frederic August,.

In 1823 he became the main violinist of the Royal Chapel of Carlo Felice in Turin. Thanks to his performance the Chapel started playing masses and motets of important European composers like Haydin, Mozart and Hummel. He afterwards became director of the Orchestra of the Royal Theatre until 1844. After that he retired back in his birth village.

Giovanni Battista Polledro was a friend and a student of Niccolò Paganini. In 1829 Paganini had planned a trip to England but due to health problems in Germany he had to temporarily stop the exhibition. He therefore asked Polledro take his place. He encouraged and authorized Polledro to introduce himself as a Paganini student on the billboard. He died in Asti on 15 August 1853.